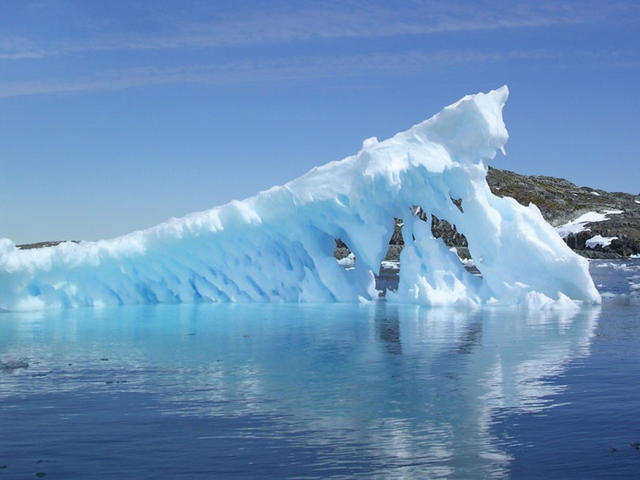 The Earth’s ice cover is melting in more places and at higher rates than at any time since record keeping began. Reports from around the world compiled by the Worldwatch Institute (see attached data table) show that global ice melting accelerated during the 1990s-which was also the warmest decade on record.

Scientists suspect that the enhanced melting is among the first observable signs of human-induced global warming, caused by the unprecedented release of carbon dioxide and other greenhouse gases over the past century. Glaciers and other ice features are particularly sensitive to temperature shifts.

The Earth’s ice cover acts as a protective mirror, reflecting a large share of the sun’s heat back into space and keeping the planet cool. Loss of the ice would not only affect the global climate, but would also raise sea levels and spark regional flooding, damaging property and endangering lives. Large-scale melting would also threaten key water supplies as well as alter the habitats of many of the world’s plant and animal species.

Some of the most dramatic reports come from the polar regions, which are warming faster than the planet as a whole and have lost large amounts of ice in recent decades. The Arctic sea ice, covering an area roughly the size of the United States, shrunk by an estimated 6 percent between 1978 and 1996, losing an average of 34,300 square kilometers-an area larger than the Netherlands-each year.

The Arctic sea ice has also thinned dramatically since the 1960s and 70s. Between this period and the mid-1990s, the average thickness dropped from 3.1 meters to 1.8 meters-a decline of nearly 40 percent in less than 30 years.

The Arctic’s Greenland Ice Sheet-the largest mass of land-based ice outside of Antarctica, with 8 percent of the world’s ice-has thinned more than a meter per year on average since 1993 along parts of its southern and eastern edges.

The massive Antarctic ice cover, which averages 2.3 kilometers in thickness and represents some 91 percent of Earth’s ice, is also melting. So far, most of the loss has occurred along the edges of the Antarctic Peninsula, on the ice shelves that form when the land-based ice sheets flow into the ocean and begin to float. Within the past decade, three ice shelves have fully disintegrated: the Wordie, the Larsen A, and the Prince Gustav. Two more, the Larsen B and the Wilkins, are in full retreat and are expected to break up soon, having lost more than one-seventh of their combined 21,000 square kilometers since late 1998-a loss the size of Rhode Island. Icebergs as big as Delaware have also broken off Antarctica in recent years, posing threats to open-water shipping.

Antarctica’s vast land ice is also melting, although there is disagreement over how quickly. One study estimates that the Western Antarctic Ice Sheet (WAIS), the smaller of the continent’s two ice sheets, has retreated at an average rate of 122 meters a year for the past 7,500 years-and is in no imminent danger of collapse. But other studies suggest that the sheet may break more abruptly if melting accelerates. They point to signs of past collapse, as well as to fast-moving ice streams within the sheet that could speed ice melt, as evidence of potential instability.

Outside the poles, most ice melt has occurred in mountain and subpolar glaciers, which have responded much more rapidly to temperature changes. As a whole, the world’s glaciers are now shrinking faster than they are growing, and losses in 1997-98 were “extreme,” according to the World Glacier Monitoring Service. Scientists predict that up to a quarter of global mountain glacier mass could disappear by 2050, and up to one-half by 2100-leaving large patches only in Alaska, Patagonia, and the Himalayas. Within the next 35 years, the Himalayan glacial area alone is expected to shrink by one-fifth, to 100,000 square kilometers.

The disappearance of Earth’s ice cover would significantly alter the global climate-though the net effects remain unknown. Ice, particularly polar ice, reflects large amounts of solar energy back into space, and helps keep the planet cool. When ice melts, however, this exposes land and water surfaces that retain heat-leading to even more melt and creating a feedback loop that accelerates the overall warming process. But excessive ice melt in the Arctic could also have a cooling effect in parts of Europe and the eastern United States, as the influx of fresh water into the North Atlantic may disrupt ocean circulation patterns that enable the warm Gulf Stream to flow north.

As mountain glaciers shrink, large regions that rely on glacial runoff for water supply could experience severe shortages. The Quelccaya Ice Cap, the traditional water source for Lima, Peru, is now retreating by some 30 meters a year-up from only 3 meters a year before 1990-posing a threat to the city’s 10 million residents. And in northern India, a region already facing severe water scarcity, an estimated 500 million people depend on the tributaries of the glacier-fed Indus and Ganges rivers for irrigation and drinking water. But as the Himalayas melt, these rivers are expected to initially swell and then fall to dangerously low levels, particularly in summer. (In 1999, the Indus reached record high levels because of glacial melt.)

Rapid glacial melting can also cause serious flood damage, particularly in heavily populated regions such as the Himalayas. In Nepal, a glacial lake burst in 1985, sending a 15-meter wall of water rushing 90 kilometers down the mountains, drowning people and destroying houses. A second lake near the country’s Imja Glacier has now grown to 50 hectares, and is predicted to burst within the next five years, with similar consequences.

Large-scale ice melt would also raise sea levels and flood coastal areas, currently home to about half the world’s people. Over the past century, melting in ice caps and mountain glaciers has contributed on average about one-fifth of the estimated 10-25 centimeter (4-10 inch) global sea level rise-with the rest caused by thermal expansion of the ocean as the Earth warmed. But ice melt’s share in sea level rise is increasing, and will accelerate if the larger ice sheets crumble. Antarctica alone is home to 70 percent of the planet’s fresh water, and collapse of the WAIS, an ice mass the size of Mexico, would raise sea levels by an estimated 6 meters-while melting of both Antarctic ice sheets would raise them nearly 70 meters. (Loss of the Arctic sea ice or of the floating Antarctic ice shelves would have no effect on sea level because these already displace water.)

Wildlife is already suffering as a result of global ice melt-particularly at the poles, where marine mammals, seabirds, and other creatures depend on food found at the ice edge. In northern Canada, reports of hunger and weight loss among polar bears have been correlated with changes in the ice cover. And in Antarctica, loss of the sea ice, together with rising air temperatures and increased precipitation, is altering the habitats as well as feeding and breeding patterns of penguins and seals.