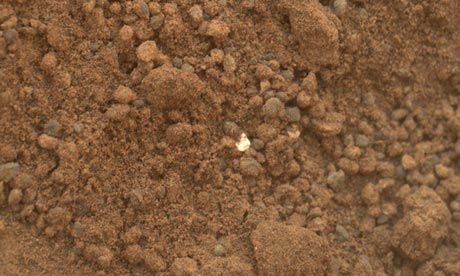 Whatever NASA claim, it is clear that this new picture of Martian soil scooped up by the rover shows something very very odd!

“We think it must be alien gold”

The sampling of about a baby aspirin’s worth of Martian sand was slightly delayed while scientists puzzled over unusual, brightly coloured flecks in the hole carved out by Curiosity’s scoop.

Initially, the team believed the bright flecks were shed by the rover, similar to bits of plastic debris discovered last week. They did not rule out that possibility, but most of the team now believe they are naturally occurring, perhaps a mineral that was fractured by the rover scoop.

“The science team started to classify these sort of differently, calling them ‘schmutz,'” said Curiosity’s lead scientist, John Grotzinger, of the California Institute of Technology. “We had a lot of fun with that, labelling them and comparing, but in the end it turns out we really feel this is a different sort of particle.”

To be on the safe side, scientists commanded Curiosity to dump that sample and collect sand from another site for processing in the onboard laboratory. The aim is to get an ingredient list of minerals in the Martian soil.

“We got to believing there were things around us and began to look at everything through that lens,” said the mission manager, Richard Cook, of Nasa’s Jet Propulsion Laboratory in Pasadena, California. “We definitely are more aware of what’s out there now and are more careful about everything we look at.”